Moving house to Europe is one of the most stressful undertakings that a person will go through in their lifetime.

There is so much to think about and the pressures involved can have an impact on not only you but your friends and family. Throw in the fact that you’re moving to another country and the process becomes even more challenging

Central Moves are here for you

Thankfully, help is at hand. If you are relocating to Spain, look no further than Central Moves UK. With so much to consider when emigrating, it’s a real headache, and that’s why you should contact us about taking care of your removals to Spain.

Our message to you is simple: take a weight off your own shoulders by entrusting us with the responsibility of transporting your items. We have years of experience in assisting people who are moving to Spain, and we also have an endless list of satisfied customers.

Every item will be removed with the utmost care

When it comes to removing everything, from large pieces like a piano to fine art and antiques, we at Central Moves have made an art form out of getting the job done with the minimum of fuss.

It is our policy that all of your belongings are dealt with as if they were our own. When you catch your plane, rest assured that all of your removals from the UK to Spain will be there waiting for you on the other side, in the same condition as when you left them.

Door-to-door service to every region in Spain.

Get a quote for free

If you want to enlist the help of the best removals company to Spain, call us today for a no-obligation quote. Our dedicated team pride themselves on going through every last detail with you in a friendly, non-pushy way. There will be no pressure on you to make a decision there and then, although we do proudly stand over the fact that, when it comes to house removals to Spain, our service is unrivalled.

Once you decide to enlist our expert help, you can choose to have your possessions removed via our full-load removals service or our part-load service.

When you sit down to decide which of the two services to use, your decision will be based on two factors: budget and the volume of possessions that need to be moved from the UK to Spain. Both options offer an amazing service. Opting for a full-load service will mean that your possessions are afforded the entire storage space of a removals vehicle.

With the part-load service, we can load a number of individual clients’ possessions on to the same vehicle. Every item is tagged and packed away just as carefully as the full-load service.

Central Moves is the founder of the Association of Independent Movers (AIM), and we have developed an outstanding reputation transporting families’ belongings to Spain & Europe. Widely regarded as the company you can trust, we have built up a lengthy customer database, thanks largely to word of mouth. The fact that you have navigated your way on to our website suggests that you might soon be moving to Spain, and if that is the case, we’d like to make you our next satisfied customer.

Our dedication to professionalism is unrivalled:

Central Moves is a member of AIM, and our promise is that all of your belongings will be transported to your new abode in Spain in the same condition as when we loaded them into the van prior to moving. Our dedicated removals team have built up years of experience and they fully appreciate the level of care that must be afforded to every item. We have earned the BS EN Certificate for quality assurance, which serves as a further illustration that we insist upon, and deliver, the very highest standards. 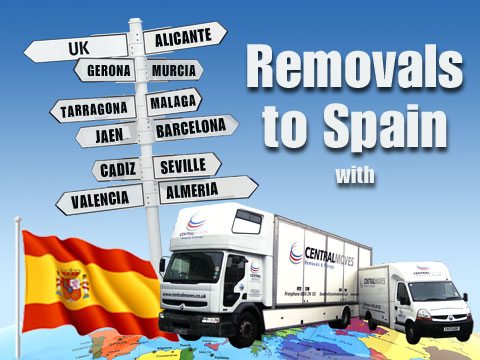 Central Moves have monthly departures to these popular spanish destinations

Famous for its abundance of high quality restaurants, Benahavis is self-described as the gastronomic corner of Andalucía. A mere 7 kilometres from the Costa del Sol, this beautiful mountain village is a favourite for expats, particularly golf enthusiasts.

Duquesa has an abundance of high quality eateries and bars, many of which overlook the Puerto de la Duquesa marina. It has all the amenities of the Costa del Sol, while maintaining its authentic local character. Many expats move to Duquesa for the wide range of water activities, including relaxing boat trips and enthralling scuba diving.

With its narrow, pedestrianised streets, the old town of Estepona is relaxed and friendly while still providing more than adequate facilities. A short walk away is the Paseo Marítimo, a palm-lined promenade overlooking the beautiful Playa de la Rada beach.

Guadalmina is one of the more urbanised choices for Brits moving to Spain. It has all the amenities expected for a town of its size, while retaining the relaxed atmosphere and lifestyle associated with Spain’s southern coast.

Close to Gibraltar, Alcaidesa grew in size during the 1990s when it was developed within strict guidelines to protect the authentic look. Alcaidesa is a prime location for many families and professionals that move to Spain so they can work in Gibraltar, which can be seen from its three beautiful beaches.

La Línea de la Concepción borders Gibraltar and provides much of Gibraltar’s residence with fresh produce. The town has many historic buildings and the wonderful Isthmus Museum, (El Museo del Istmo) which is based in the Old Military Headquarters.

La Zagaleta is an exclusive residential estate in Andalucia, Southern Spain. It has two magnificent private golf courses, an equestrian centre and its own heliport. Since only members and invited guests can enter the estate, it is free of tourists and holiday-makers.

The municipality of Manilva is made up of several small communities and although it has a high expat population, it has a very Spanish feel. The small fishing communities of San Luis de Sabinillas and Castillo de la Duquesa sit on the coast, a few kilometres from the picturesque white village of Manilva.

Marbella is a well-known tourist destination with a high number of expat residents. The main areas of Marbella, (Town Center, Golden Mile, Puerto Banus, San Pedro, and Nueva Andalucia) each have their own attractions. Although there is a lot for tourists to do, there are still plenty of nearby areas that offer a quieter, more relaxing environment, such as Nagueles.

Although the beach at Nagueles is very popular among the rich and famous, the residential area is quiet and relaxed. The luxurious Town Houses range in price from around £300k to £4M, so there is a wide range to choose from. There is also the option to purchase a villa in a private gated community, such as Sierra Blanca del Mar.

Built in the traditional Andalucian architectural style in the late 1960s, Nueva Andalucia is the largest area of Marbella and a very popular area for expats. The nightlife in Puerto Banus is not far from the quieter residential areas which include the small villas and townhouses at La Torre de Andalucía and La Campana in the western section. The eastern section of Nueva Andalucia has the higher valued villas and enough high-quality golf courses to earn it the name “Golf Valley”.

With its spectacular views and long history, Ronda enjoys the status of being a city, while retaining the atmosphere and appeal of a village. Perched above El Tajo gorge, Ronda dates back to the 9th century BC and has attracted many of history’s famous writers and artists. La Ciudad (the city) is the old part of Ronda, with cobbled streets and elegant mansions, some of which are still home to Ronda’s titled families.

Sotogrande is one of Europe’s most prestigious and luxurious residential developments. The world class marina, which comprises Puerto Deportivo de Sotogrande and the newer Ribiera del Marlin provides a full range of top-quality amenities, from wonderful restaurants to luxury hotels.

Relocating To Switzerland May Require A Removal Expert To Help
November 25, 2016
Go to Top