Looking for a Trusted Removal Company to Help Moving to Ireland ? 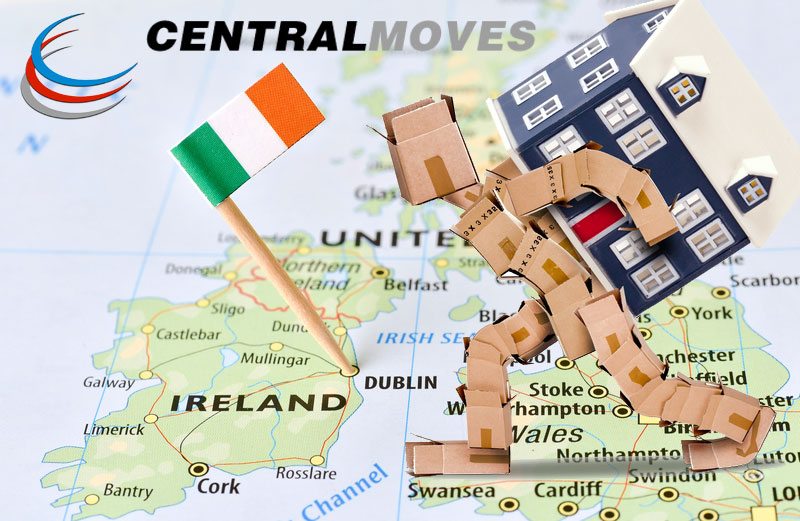 All our staff are fully trained, experienced and dedicated to making the removals process as smooth and stress-free as possible. This has led to much of our work coming from recommendations by our growing number of satisfied customers. Together with our membership of BAR, AIM and FEDEMAC, this makes us one of the UK’s most recommended removals companies.

At Central Moves, we understand that every move is different, so our removals services can be customized to suit our customers’ needs. Whether we are shipping boxes from UK to Ireland, or conducting a full house move from London to Dublin, we always give our customer’s requirements the highest priority.

While we are still members of the EU, moving to The Republic of Ireland is not much different to moving from mainland UK to Northern Ireland. This is unlikely to change for many years, if at all.

As a professional removals company with many years’ experience of European and International removals, we are happy to help with any enquiries or concerns.

Many of our customers require a smaller move, that doesn’t fill even our smallest of vans. In this case, we can provide a part-load service.

A part load allows us to reduce the costs of moving, by sharing space on the removals van with other shipments. All items are individually inventoried, labelled and separated from other shipments to ensure everything is delivered to the appropriate address. All effects will be wrapped with industry approved packing materials for protection during the move to Ireland. This is a full door to door service in secure purpose built removal vehicles.

Part load removals are very popular, as the removals company can spread the transport costs and thereby help to further reduce the cost of moving. 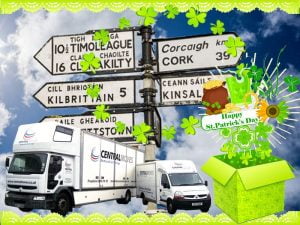 The population of Ireland is approximately 6.4 million. Just under 4.6 million live in the Republic and just over 1.8 million live in Northern Ireland. Despite the two jurisdictions using two distinct currencies (the euro and pound sterling), a growing amount of commercial activity is carried out on an all-island basis. This has been facilitated by the two jurisdictions’ shared membership of the European Union , and there have been calls from members of the business community and policymakers for the creation of an “all-island economy” to take advantage of economies of scale and boost competitiveness.

Ireland is subdivided into four provinces: Connacht (west), Leinster (east), Munster  (south), and Ulster  (north). In a system that developed between the 13th and 17th centuries,  Ireland has 32 traditional counties. Twenty-six of these counties are in the Republic and six are in Northern Ireland. The six counties that constitute Northern Ireland are all in the province of Ulster (which has nine counties in total). In the Republic, counties form the basis of the system of local government. Counties Dublin, Cork, Limerick, Galway, Waterford and Tipperary have been broken up into smaller administrative areas. 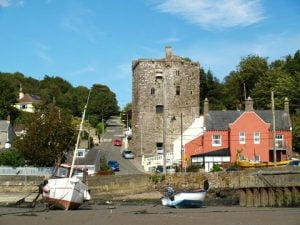 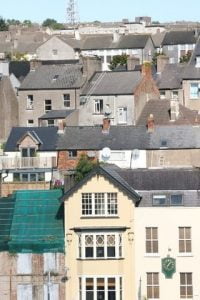 The Republic in particular has seen large-scale immigration. The 2006 census recorded that 420,000 foreign nationals, or about 10% of the population, lived in the Republic. A quarter of births (24 percent) in 2009 were to mothers born outside of Ireland.

Irish culture comprises elements of the culture of ancient immigration and influences (such as Gaelic culture ) and more recent Anglicisation and Americanisation as well as participation in a broader European culture. The culture of the island has also many features shared with Great Britain, including the English language, and sports such as association football, rugby, horse racing and golf .

Documents required to live and work in Ireland

You do not need a visa if you are a citizen of The members of the EEA There are 27 countries of the European Union (EU) , together with Iceland, Norway and Liechtenstein. If you are not a citizen of one of the countries in the EU, you will need a visa when you travel to Ireland. If you are coming to Ireland from another EU country as a dependant of an EU national, and you are not a citizen of the EEA, you will need a visa when you first travel to Ireland. If you plan to stay for more than 3 months, you should register with the immigration authorities and apply for a residence card. If you receive a residence card, you will not need a re-entry visa for travel into Ireland in future.

You do not need a visa to land in Ireland if:

Central Moves are one of the London’s top removal companies for Moving from London and Ireland who combine specialisation with our total commitment to providing a professional and personalised service, which this is why thousands of families and individuals have entrusted Central Moves with their Irish home removals, furniture removals Ireland and personal effects. We also offer removals from Ireland to the UK on a weekly basis, contact us today for a free quote or free advice.

Here at Central Moves we pride ourselves in aiming to be the best company for Irish removal services . Central Moves is the founder of the Association of Independent Movers (AIM), and we have developed an outstanding reputation transporting families’ belongings to Europe.

We are also proud to be members of the

Further testament to our success is the number of corporate clients who continue to choose Central Moves and indeed, refer us to their families and friends for removal services.

Finding The Most Popular Places To Move To In Ireland
December 7, 2016

Need A Removal Company To Or From Ireland?
March 17, 2016
Go to Top
We use cookies to ensure we give you the best experience on our website. If you continue to use this site we will assume that's ok, you can opt out by clicking no.OkNoRead more